Points in the Paint: Raise the banner, readjust expectations 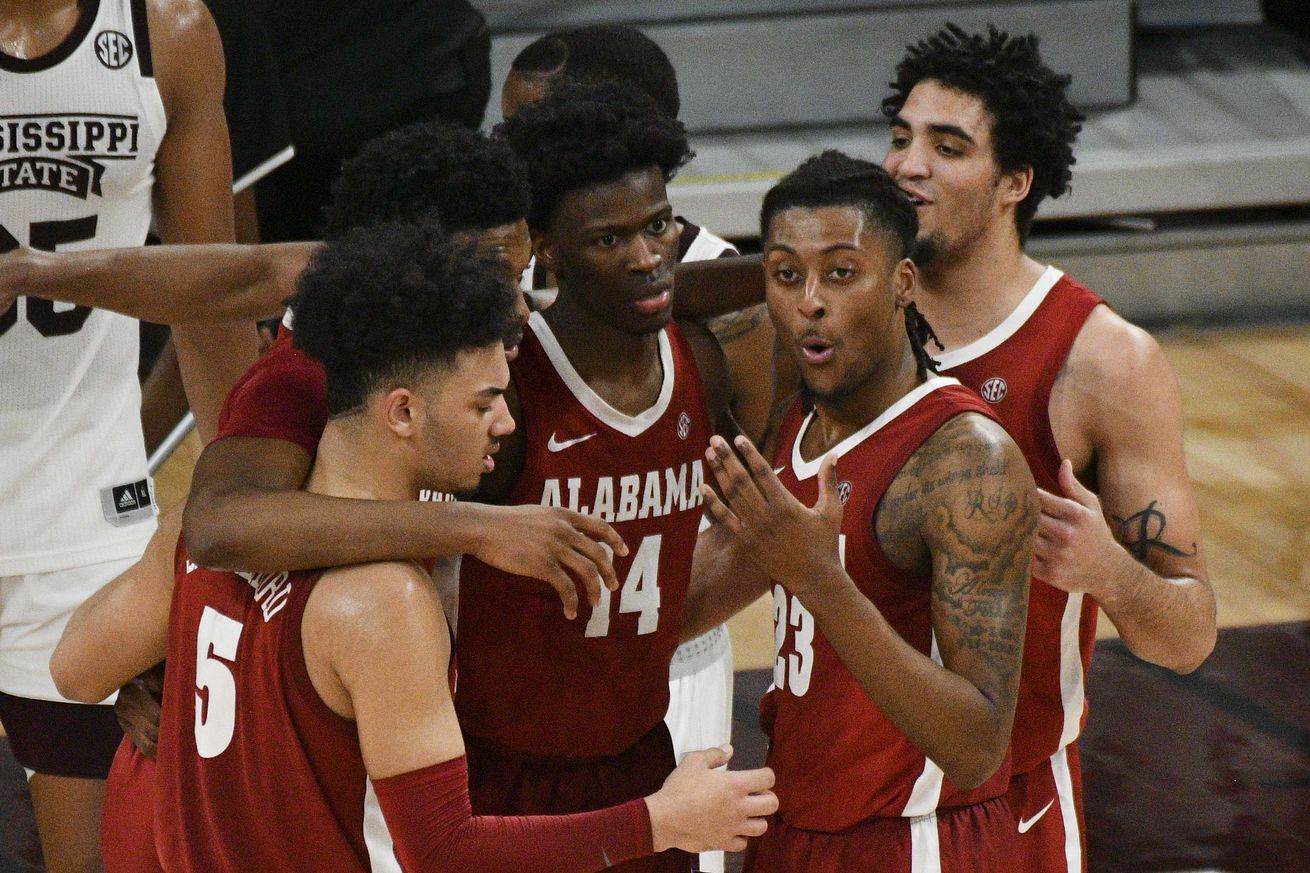 Good morning to all the champions out there. You can only comment on this article if you support a school that is ranked in baseball, softball, gymnastics, track & field, basketball, swim & dive, golf, football, tennis, and wheelchair basketball (get your shit together, volleyball and WBB — just kidding). But these are the ground rules. So now let’s take a moment to reflect on the rankings of your 2020-2021 SEC Championship Alabama Crimson Tide basketball team.

That SEC championship banner, the Tide’s first in two decades, is gonna’ look really sweet in the new basketball arena that — with your help — we will single-handedly harass Greg Byrne into building.

With one title out of the way, and as the Tide getting healthier, we turn to the next few games to tune-up the Tide — Auburn on Wednesday night, and then Georgia on Saturday. It would be nice to get the offense on track heading into postseason play. And fortunately, neither of those teams plays defense. Sharife Cooper is listed as “doubtful” for this game; but Coach Oats fully expects that’s some gamesmanship on Bruce Pearl’s part.

Alabama coach @nate_oats says UA will prepare as if Auburn PG Sharife Cooper, who has missed 2 games with an ankle injury will play Tuesday although listed as doubtful. “I’ve used ‘doubtful’ before, too, and the kid ended up playing,” Oats said, adding “it’s a rivalry game.”

That said, I’m not so certain he does play. After watrching his debut, where it was clear he had Lottery talent, I told these other guys that I fully expect Sharife to get 10-12 games of tape and then peace out on the season. I would note that Sharife played exactly 12 games before sitting out the ‘Barn’s last contest with an “ankle sprain”. And, really, why would you play any more? Wiseman was a lottery pick on three games. Cooper has more than shown that he is a Top 9 NBA selection. Playing for pride is well and good; but when you’re a one-and-done on a team DQ’d from the postseason, your future matters a whole lot more.

So, no, I don’t think Cooper will be on the court.

Whether he suits up or not, now is not the time to let the foot off the gas; in fact, it’s time to bear down and get back to playing outstanding basketball:

“We’ve won it, we’ve clinched it, let’s get back to playing some good basketball.”@AlabamaMBB‘s Coach @nate_oats is ready to keep the momentum going pic.twitter.com/7zaplYDLO4

As expected, the Tide and the Hogs are your favorites to win the SEC Tournament — Arkansas in particular is red-hot, having now won 9 in a row and has vaulted to a 3-4 seed in most bracketology picks. As much as the Big 12 has come on down the stretch, and as highly regarded as the top of the Big 10 are, both of the SEC’s best teams need continued excellent play down the stretch to not slip in the Committee’s rankings.

The problem is, despite the double-bye, Alabama is likely going to get saddled playing against one (and probably two) of the SEC’s molasses teams. The matchups are far from set — and a lot will change this week — but for now, Arkansas seems to have the most favorable half of the bracket:

In a perfect world, I’d rather get Mizzou on ‘Bama’s side of the bracket and send Kentucky over to the face the piggies. Cal’s teams can suck all they want, but one thing they do very well is body slam teams in the SEC tournament — it’s ridiculous; the Wildcats have won this damn thing 31 times overall, and 6 in the last decade. That’s on top of winning the regular season crown 6 of the last 10 years too. And — oh, joy! — BJ Boston is starting to peak too!

The SEC, Big 10 and Big 12 Tournaments are going to be outstanding, however. And Blogging the Bracket has the complete television schedule and updated brackets here.

There are four and only four teams in the Top 25 of the NET who also have a Top 25 schedule. Three of those are Big 12 squads; the other is in Tuscaloosa.

Bracketology Stat of the day: Alabama, West Virginia, Kansas, and Texas are the only teams ranked in the Top-25 of both the NET rankings and Strength of Schedule.

And, don’t look now, but yes, the Big 12 is really making a push to overcome the Big 10 as best overall conference. The flyover may not have as much strength at the top, but you have Kansas, Oklahoma State, Oklahoma, Texas, Baylor, Texas Tech, and West Virginia all plausibly eyeing a chance at the conference title — and deep runs in March. In fact, Evan Miya’s analytics have three Big 12 teams even making the Final Four.

If only we had a poll about this below!

Daily updated tournament simulations are now available at https://t.co/cegyfz8ykZ, using the latest bracketology. Here’s the first one from today:

While we’re on the subject of brackets, it’s not too early to start obsessing over those sweet seedings and possible matchups:

Jerry Palm has ‘Bama a 2-seed, opposite the Illini (who vaulted Ohio State for a top seed after winning this weekend’s head-to-head).

Making the Madness similarly has ‘Bama a 2-seed in the “East” opposite Illinois.

Fox / TSN’s Mike Decourcy threw ‘Bama in Region 3 as a 2-seed, against perhaps the hottest team in the country at the moment: the Michigan Wolverines.

Lunardi still has the Buckeyes a 1-seed, and still has ‘Bama a two-seed opposite Ohio State in Region 4. I don’t think the Big 10 is the most athletic conference; far from it. But one thing they do very well is play “tournament basketball” — they are physical, they play outstanding in the half-court, they have great ball movement, they hit their free throws, and they are very deliberative to take care of the ball: it is Cinderella kryptonite. One bad night shooting won’t doom them (a la Virginia). For that matter, it may be ‘Bama kryptonite as well.

And, on the Women’s side of the SEC bracket, the Tide is sitting as 7-seed, with a potential second-round matchup versus No. 2 South Carolina. They are also sitting as a 7-seed overall in the WNCAAT, as well. The difference in this year’s team from the last few has been conference play. Kristy Curry’s teams have tended to devour their non-con schedule, and then get absolutely mopped up in the SEC. This year, though, ‘Bama finished at .500 in conference action. And that has been the difference between NIT flameouts and making the Dance. No matter what happens this month, it would be very good to see Curry build on this incremental success — she’ll almost certainly be extended after this season’s output.

“We’ve won it, we’ve clinched it, let’s get back to playing some good basketball.”@AlabamaMBB‘s Coach @nate_oats is ready to keep the momentum going pic.twitter.com/7zaplYDLO4